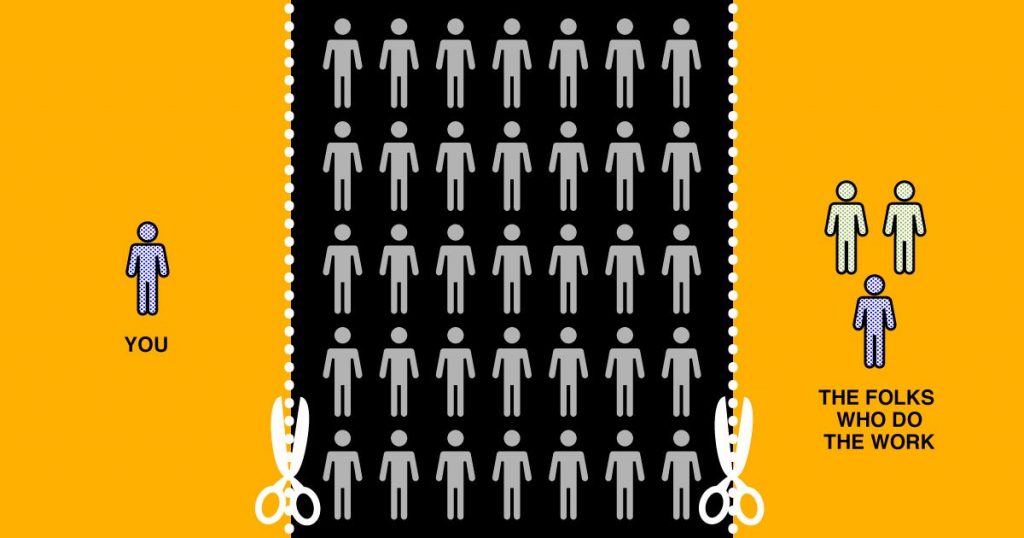 We’re approaching our fourth birthday here at The Builders Arms, and the reasons we took that leap-of-faith to set up our own creative company seem to be as relevant today as they were back in the summer of 2014 – maybe even more so.

I guess it came from many years spent in the big multinational agencies where we observed the machine first hand. And without wanting to sound in any way vituperative, how it was failing. Too many layers of management, too many egos, too many bottlenecks, too much waste.

It begs the question, how many agency people does it take to change a lightbulb? A lot, it would seem. And guess what – the agency is billing for all of their time.

It occurred to us that there had to be a simpler way to help clients build brands. One that stripped away all of those layers and just connected the people with a business problem, with the people who could solve it. And that’s what we created The Builders Arms to be.

And that thinking seems to be supported today by what we’re hearing and seeing from some of the world’s biggest advertisers. And let’s face it, when Marc Pritchard speaks, Madison Avenue tends to listen. Probably something to do with him being the head of P&G.

In his view, the sort of agency he wants to do business with should “disrupt the archaic Mad Men model, eliminating the silos between creatives, clients, and consumers, and stripping away anything that doesn’t add to the creative output.”

So high five’s all round then, especially from folks of the creative persuasion when the head of P&G calls for creatives to make up three-quarters of an agency’s resource. But to be clear, he’s not talking about more creatives; he’s talking about less of the rest.

It’s interesting too that Unilever is also forcing change. Like P&G they have taken a chainsaw to the number of agency relationships they hold and are enthusiastically encouraging (let’s be honest, it’s gun to head sort of thing) the agency relationships that remain to become more streamlined, flexible and cost-effective.

Think about it like this; Big agencies have been built historically on long-term relationships, yet increasingly clients are looking to award faster turnaround, more project-based assignments – and it’s not surprising given the way both parties have behaved in the past.

This Builder remembers working on a piece of business that will remain unnamed, but it was for one of the big FMCG brands, and I was staggered by the inertia I encountered. Workshop after workshop, creative presentation after creative presentation, and still the brief remained un-cracked.

It was only when the blood started dribbling out of my ears I realized that both agency and mid-level client were happy with this status quo. That mid-level client (who was only going to be around for two years tops before moving on) never had to commit to anything; Therefore, balls were never put on the line. And the agency loved it because the longer the machine cranked, the longer the meter kept running on that fat management fee the client was paying. It was only a matter of time before someone grown-up decided to put an end to that.

None other than Sir Martin Sorrel has recently had to admit that the current business model he and his agencies operate is wrong and needs to change. Cut to WPP’s share price falling off a cliff.

And let’s face it, Marty, maybe opening a big shiny agency office that’s bigger and posher than your clients, right across from them on the River Thames, might send a message that they’re paying a tad too much for your services. Thoughts?

So, the world has changed, but that presents a problem if you’re one of the Ministries of Advertising. The brave new world of zero-based budgeting means the big agencies can’t put the best talent (and most expensive talent) against projects. So cheaper more inexperienced people are increasingly being leveraged to make the whole thing work.

Conversely, a small shop like ours can bring the best talent to the table, because we operate a fluid model. What that means is we bring in resource only when we need it. But it’s telling that the talent pool we can tap into of highly skilled and awarded freelance people is deep. Ridiculously deep. And that’s because the big agencies have shed many of their most experienced people.

So back to the question; what should a creative company look like in 2018?

It should be streamlined and flexible with the focus on creative. It should be more accountable and less wasteful, and it might also be worth giving the big shiny offices a miss too.

In fact, it should look a lot like us. Our fourth year is nearly upon us, and while it’s not all been plain sailing, we wouldn’t change a thing. We’re proud of the work we’ve done and the clients we have. And we’re doubly proud of the fact that we’ve achieved with just a handful of passionate and committed people, what it would take an army to achieve in the traditional agency world.

The P&G’s and Unilever’s of this world seem intent on forcing their agencies to change, and we wish them the best of luck doing that because it’s the right thing to do.

But we would also like to humbly suggest, that it might be worth talking to the people who have already embraced the change they are seeking.